The Men’s Over 40 York and District Champion for 2019 was Angus Clapham(Wigginton) beating Jay Talintyre (York) 3-0. A very disappointing entry which needs to be addressed for the 2019/20 season but at least there is no blank on the honours board!

The Men’s Over 50 York and District Champion for 2019 is Ian Tooms (Wigginton), yes he is finally 50! It is so good to report this bearing in mind where he was only 3 years ago thinking he may never play squash again , let alone win a tournament.  Ian beat John Fuller (Scarborough) 3-0.  John travelled over for all of his matches from Scarborough and plays at the new Barrons Club courts attached to Scarborough Rugby Club, 2 miles north of the town centre.  As a new club, John is keen to promote the facility and was thrilled to be in the final as it gave him a publicity angle to get the club in the local press.  By the way, if you think your court fees are expensive, John and the rest of the club pay £8 per court!  It is great to have some keen members of the league wanting to promote squash. 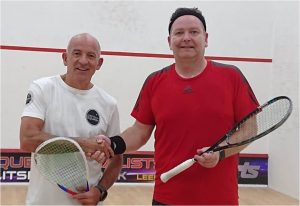 Wigginton have no problems in hosting the Veterans & Vintage in support of the work Ian Ball does for the York & District league, but really we could do with a bit more enthusiasm & support for not only these competitions but also the York Open.  Every Club should have at least one member representing their club in these competitions. If you have any suggestions as to how to encourage better participation, advertise & promote better in the future please get in touch with me, as I do not mind supporting the league in running the Vets and Vintage in 2020. It would be good to have one keen contact at each York & District Club who would ensure that their club is represented by the best players that are available to support each competition.