The York and District Veterans (o-40) and Vintage (o-50) were held at Wigginton Squash Rackets Club between Sun 19th & Fri 24th November.  There was a disappointing entry in both competitions but that did not detract from the squash played. Both competitions were played in an excellent spirit, with a great attitude on court which is always great to see.  Players came from Wigginton, York RI , York, Stillington, David Lloyd & Pocklington.

If anyone has missed out on the communication and would like to be informed directly next season, instead of failing to see notice on the website or not being passed info by club representatives then please email  Nick Clifford and you will be put on an email list for next season! – nickandsheila@tiscali.co.uk

To the finals night….despite having 12 (some dual members) out of 16 entrants Wiggy came away with two plate final wins and left the titles to go to David Lloyd & Pocklington players.

The Over 40’s Veterans plate was between Wiggy third team players Nick Clifford and Chris Codrai, there was no mercy shown despite a knackered knee as Chris put away Nick 3-0 against the team seeding……!

The Y & D Vintage Champion 2017 is Alastair Dick of Pocklington who beat Wiggy’s Rob Cooper 3-0. Rob was getting into the match in the 3rd game as Alastair was beginning to “puff” a little but he held on to win. Alastair has had a season out of squash with an injury believing he would never play again , so it is nice to see him regaining his fitness and back on court playing. Congratulations.

The Y & D Veterans Champion is James Rollinson of David lloyd, despite being run close by Adam Smith (3-2) in round 2 then Mark Thomas (3-1) in the semi he beat Wiggintons Angus Clapham 3-0 in the final. Angus who ran a few miles on court, made too many mistakes to make the match go past 3 games, which a “Point a Rally” to 11 match cannot forgive. Congratulations James. 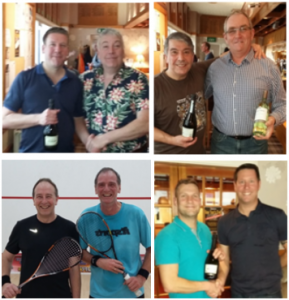