Thirty five years ago, Mike Riley of Wigginton Squash Club donated a magnificent trophy to the Men’s York and District League as a team handicap trophy & this was soon to be followed by the Ladies Riley Rosebowl.

Needless to say Wigginton men have always failed at the final hurdle and failed to win the trophy in three final appearances. Until now! In fact four clubs that no longer exist have won the Riley Cup..Magnets, South Milford, Oval Ball & St John’s Students before Wigginton SRC!

The final of the Riley Cup was due to be played at 3pm on a Sunday afternoon at York, but Stillington, who’s courts were being refurbished, graciously and very sportingly agreed to play at Wigginton on the Sunday evening to make more of a night of the finals. Wigginton put on food for the main & plate finals and a good night was had by all. 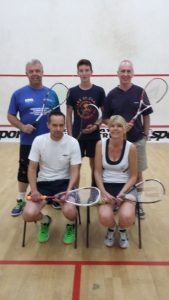 The final was a tense affair, a new 4th team player, Steve Drake for Wigginton, playing as a reserve in his first competitive match got 2, 4 & 9 points against Giles Bilton. Wigginton were on the back foot but then Mackenzie Nichol playing Dominic Pegg conceded 7, 8 & 9 points.

Probably all even stevens at this point in the match but with Tom Howell, Marc Thomas & Anthony Baines at 2,3 & 4 , all of whom have played no 1 for Stillington over the last few seasons it looked a rather gloomy prospect for Wiggy! Was it a slow start by Stillington players or really pumped up Wiggy players…the picture is painted by the side of fence you were on! But Mark Wilson , Nick Clifford & Chris Codrai all won the first of their three games…..in the following games although the legs were weary they all managed to put in very respectable performances. 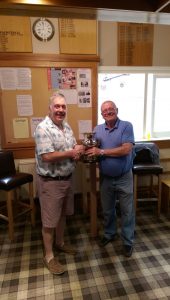 In the Club that night was Mike Riley himself, although he still lives in the village he rarely gets into the Club. He kindly stayed for the presentation as Ian Ball announced that with a 45 point handicap on their score of 161 , Wigginton had beaten Stillington by 12 points!

Mike was obviously, over the moon to present the Trophy to Wigginton after all these years & he himself admitted that even though he set the handicaps for 10 years…his team could never win it ! 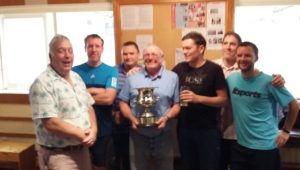 Thanks must go to Ian Ball who organised the tournament this year & together with Rod Erridge and Marc Thomas, assessed the teams and decided on the handicaps.